Most days I do alright with my daughter, Elya, traveling throughout Southeast Asia. The panic resulting from not being able to pick up the phone and hear her voice somewhat kept at bay. But yesterday was quite a different story. I had not heard from her for days and the worry began to torment mind. Like bats flying in the winery cave I recently visited, I dodged these dark and foreboding thoughts that came from out of nowhere.

Worries as to whether she was safe, healthy, alive stormed the citadels of my faith dismantling serenity. There was no comfort to be found even though I practiced all my tools of recovery: wrote about my fears, phoned a friend etc. By nightfall, I was crestfallen. A recent conversation with my sister-in-law came to mind. She admitted to calling her son’s cell phone during his Air Force boot camp just to hear his voice. I smiled knowing I had saved one of my daughter’s phone messages so I could replay it again and again even though it was quite testy:

“Mom, I need addresses! I know you’re home so why aren’t you picking up?”

I was in the shower and did not hear the phone. The obvious annoyance did not seem to matter in my delusional state that I can only describe as a parental strain of “Jungle Fear.” A dread that wraps itself around your brain like these roots in a picture my daughter sent to me. In fact, now I put my cell phone on the bathroom shelf so I can answer even though soaking wet.

This Jungle Fever I speak of has distinct characteristics. One obvious symptom is the tendency to rewrite history. Every former annoyance becomes a moment for musing how simply wonderful your child is. Instead of the clean house bringing delight, you would give anything to see her clutter strewn across the floor. On a positive note, Jungle Fear can make you spiritual due to taking the “night shift prayer alerts.” Sudden interrupted sleep finds you staring at the ceiling muttering, “Oh God, oh God, oh God!”

I vividly remember one such time when my son was traveling through South America. Just when I thought my obsessing unfounded, I received an email, “Almost died today when I tried to jump around a boiling geyser.” Wow, that’s comforting! Stories of hang gliding over the rain forest, swimming in piranha infested waters, and parachuting out of an airplane definitely exasperated that bout of Jungle Fear. Then again, can I blame him? I did take him with me while smuggling Braille bibles into China when he was only eight months old.

Jungle Fever can also have genetic properties. My own mother suffered from this odd disease when I almost died of an appendicitis flare up while in communist Russia. I was only twenty-years old.

Last night my symptoms reached an all-time high! I just could not find peace of mind anywhere; the torment of “not knowing” how she was reached unbearable levels. Then I go on Facebook and see her riding an elephant…CURED! 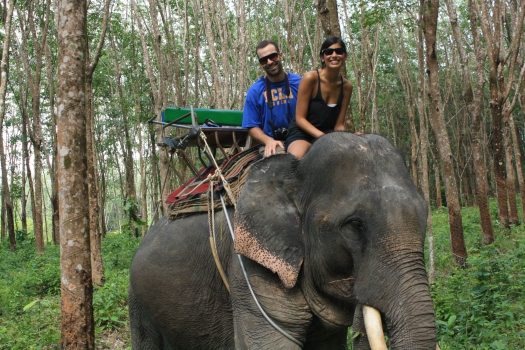